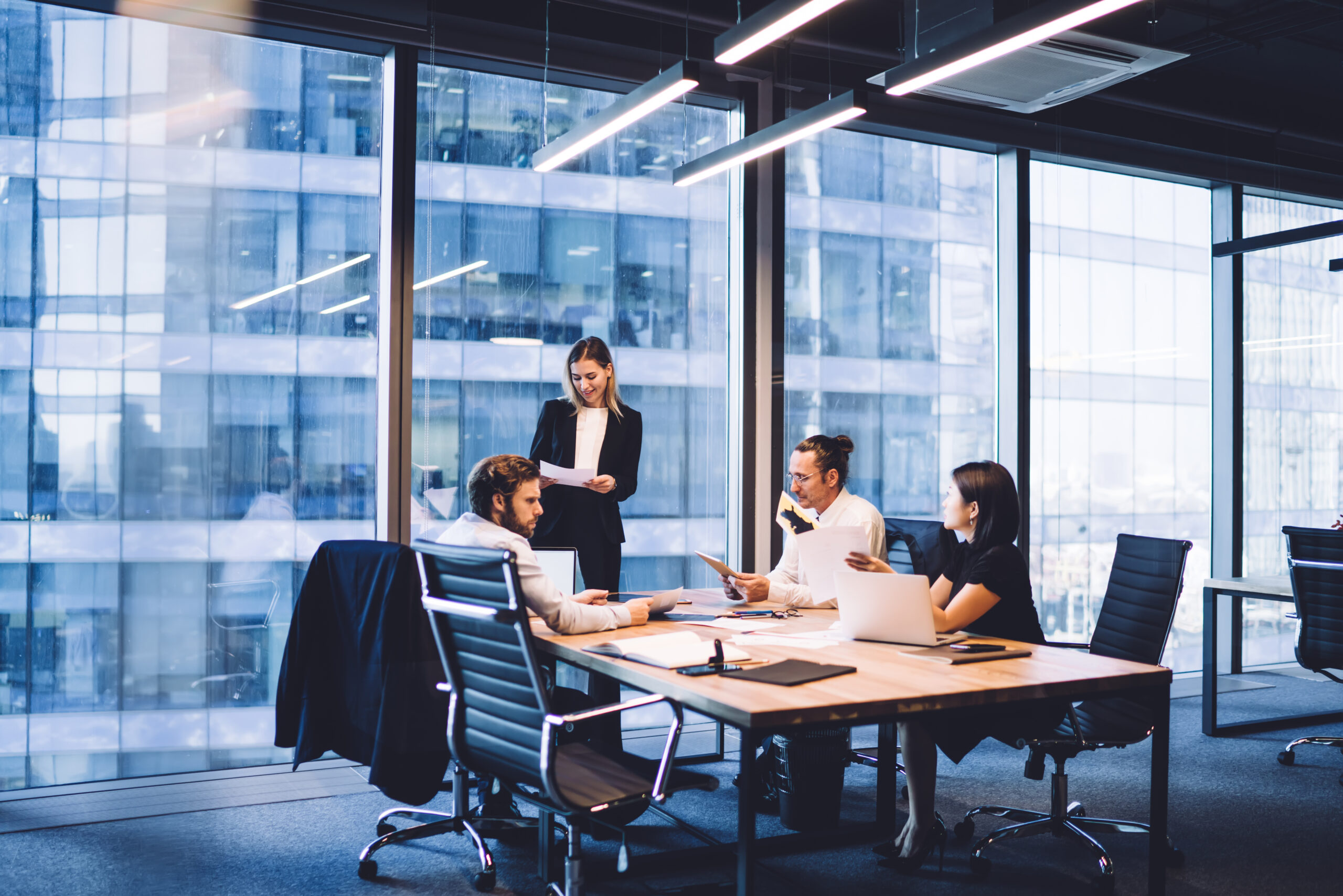 More and more technologies keep appearing to make life easier, and the entrance of blockchain technology has brought in a new approach to managing and creating enterprise systems. At the moment, blockchain is at the same position as cloud and big data were some years ago. Most people think bitcoin or cryptocurrency when they hear the term blockchain, however, that’s not all there is to it. If you have started using blockchain or have only heard or read about it, then you would have one basic question. How is it possible to use blockchain for enterprise applications?

Blockchain is a network of a decentralized system, a global network of computers jointly manage a database that collects and records transactions. For the past fifteen years or so, businesses have experienced significant changes as a result of open-source software, cloud, big data, and artificial intelligence (AI). These terms are not jargon anymore, because various businesses have adopted the use of these technologies. I’ll review the current state of blockchain for enterprises.

This innovative technology can be useful for other things besides creating a digital currency. Blockchain for enterprises can mean, for example, developing new financial technologies. It can serve a wide variety of other purposes as well. These include keeping track of physical assets or voting rights, digital assets, tracking ownership. A business can even use it for locating the source of a document.

Blockchain technology has been defined as an effective way to reduce costs, increase transaction speed, and establish trust between transacting parties. A study by Santander Innoventures claims that Blockchain technology has the potential to reduce banks’ yearly infrastructural costs by $15 billion to $20 billion by 2022. The Santander fintech study (produced in partnership with Oliver Wyman and Anthemis Group), showed that distributed ledger technology (DLT) would save banks some money by removing central authorities and evading slow and expensive payment platforms.
Beyond payments, the authors also noted that in time, distributed ledger technology could support smart contracts. These are computer protocols that implement or verify contracts. This will lead to blockchain for enterprise use in security, trade finance and other areas where risks relating to counterparties arise.
Aside from bitcoin or cryptocurrency in general, the adoption of blockchain for enterprises is growing in other industries faster than you might think.

Blockchain activity became relevant in the financial services industry a few years ago. It has advanced through various tests, pilots and proofs of concept. Santander, RBC, JP Morgan, Citibank, American Express, Visa, MasterCard, Goldman Sachs, and BNY Mellon, are some financial services firms that have started directing efforts towards blockchain-related researches. These companies have groups working internally, and professionals dedicated to blockchain technology.

Despite the increased use of blockchain technology, financial institutions are limited in their efforts at testing blockchain as a result of restraining regulations. Hopefully, as more fintech architects continue to unravel the revolutionary technology, this challenge will become history.

Here are some examples of financial institutions that are currently working on blockchain technology.

Goldman Sachs is on trial to developing its own strategy. Information related to this attempt by the firm hasn’t been made public, and little is known about it. The firm has a group dedicated to blockchain for enterprise applications and working internally. It has investments in Digital Assets Holdings, a company which itself is an investor in distributed ledger technology companies that supports financial institutions.

American Express filed for a patent in April 2017. This was a patent for a new customer reward program that relies on blockchain technology for record-keeping and rewards customers in cryptocurrency. The firm announced its successful use of Ripple to help corporate customers from US banks to UK Santander branches. Just as a sidenote, we’re also working on customer loyalty management on the blockchain.
Visa is also working on blockchain for enterprise applications. It launched its blockchain-based business-to-business payments service platform known as B2B Connect in November 2017. The platform was initially announced in 2016 and it was developed in collaboration with Chain, a blockchain infrastructure-focused enterprise.

This industry seeks to utilize blockchain technology by using it to improve the supply chain. Walmart has already started a blockchain trial for monitoring the movement and origin of pork in China.

Alibaba, a retailer from Asia, announced late last year that for the past two years, it had been working underground to develop an in-house private blockchain network system. Its goal is to track the authenticity of products and to prevent product counterfeiting. Head of Ant Financial’s Innovation Lab, Geoff Jiang, stated that with blockchain for enterprises, they would be able to tell where a product is coming from, which retailer it is coming from, and its source. This, in other words, will ensure that products collected are from tested and trusted suppliers.
An Espeo client, Luxify does this as well. The Hong Kong firm uses blockchain to verify the authenticity of luxury items.

This is a perfect example of where an enterprise can use blockchain to simplify and solve complex industry operations. Port of Antwerp in Belgium has recently started a joint project with the startup T-mining. Their project is set to make using blockchain in handling containers at the port is more efficient and secure. By setting this up, the harbor will able to safely digitize transactions between various members including carriers, drivers, forwarders, terminals, and shippers. All this without any intermediary. This will lead to cost reduction as a result of reduced paper works. It will also minimize the possibility of fraud.

TUI Group, a multinational travel company, recently invested one million euros in blockchain for enterprises. In fact, the company is in the phase of transforming its hotel networks into its own blockchain named BedSwap. The new model is expected to save up to 100 million euros yearly. Another example is Jessica VerSteeg, the CEO of Paragon Coin, is an advocate of cryptocurrencies and a supporter of legitimization of the cannabis industry. She’s now working on applying blockchain principles in legitimizing pure-grade cannabis suppliers.

American multinational technology firm, IBM, and the US Food and Drug Association (FDA) has signed an agreement to utilize blockchain for enterprise applications. Their plan is to create a scalable health data exchange that will address the lack of transparency in health data and improve on patient privacy trust. The two organizations have explored the blockchain scope since announcing their partnership in January 2017. They kept looking into how they could use blockchain to support information exchange through different data types, ranging from clinical trials to evidence data. The initial trial was on oncology-related data. As at this time, Shahram Ebadollahi, IBM’s chief science officer for Watson Health, noted that the healthcare industry was undergoing significant changes as a result of the data being generated. Ebadollahi also said that since blockchain technology supports a highly decentralized framework for data sharing, innovation will accelerate throughout the healthcare industry.

Karl Hoods, the chief information officer for Save the Children, said he had sent notes to the board telling them about the potentials of blockchain for enterprises in 2016. The organization recently started thinking about introducing the proof of concept that would help in the verification process of volunteers in the field. As they mention, sometimes there isn’t enough time to carry out background checks on each individual. On a smaller scale, token-based businesses also use blockchain for charity for tracking donations.

Blockchain for enterprises — the bottom line

We can go on naming important cases where blockchain technology is used for enterprise purposes. 2017 saw a significant increase in the adoption of blockchain technology by big businesses. There has been a notable rise in pilot testing, patent applications as well as proof-of-concept forms of research and design. Blockchain can really be the difference between maximizing profits and falling below standard.

The only obstacle to the adoption of blockchain for enterprise applications would be how new it is. People still don’t understand this technology all that well. However, different organizations and countries offer training and development programs for young people – and more seasoned businesspeople. I myself run one of these as part of Espeo’s blockchain training services. Hence, understanding how the technology works and using its full potential will help save billions of dollars year after year.

How enterprise blockchain applications can improve your firm's internal processes